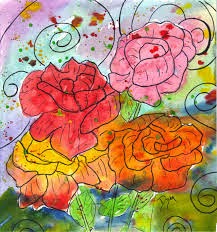 "Increased Capacity"... That's what my chiropractor called it when I told him what had happened to me last week.

My younger daughter had come home for her summer visit with the strong commitment to help us go through our home and release whatever we were not using.

It was her idea.  She had been performing this "spiritual" surgery on her own home and found herself feeling very liberated and full of energy as a result.

The twelve days she was home were packed with a LOT of activity including frequent encouraging comments from her about how someone else could use the item or how things don't have to be the way they have always been.

She was the voice of reason and she was the voice I needed to hear.  As we navigated our way through a lot of difficult decisions, many emotions surfaced and I found it necessary to "step up" to a new, more simplified way of living.  And it wasn't easy to release the paperwork I had accumulated (this body of work, the testimonials to my perseverance and effort), but it felt necessary and important and I recognized what a wonderful opportunity this was.  By the time my daughter's visit was over, her voice had become "the voice in my head" and I knew the good work that we had begun would continue.

I have read many times, in many places that releasing things...moving them out and possibly giving them to others who could use them...brings new energy into your life and I looked forward to this happening.  But here's where I was surprised.  I thought the new energy would show up in my writing as I am busy with that vocation nearly every day.  However, before that even had a chance to happen, the new energy showed up in a different, very unexpected way.

I suddenly found myself able to deal with issues that had previously felt overwhelming to me.  Now I was processing them in a relaxed, centered way and these were things I had been struggling with for some time.

As I told this amazing story to my chiropractor and we assessed my physical situation I recognized that the new energy was also helping me heal my body and, for this, I am especially grateful.

I am convinced the Divine Universe has lent some very significant assistance in this endeavor.  My daughter told me she had come up with the idea to make this offer last March and, once it had popped into her head, she had never wavered from it.  She has been an instrument of grace and the gifts coming from her generosity are manifesting in a vibrant and soulful way.

I am writing about this exciting experience because it seems too important not to relate.  Releasing things no longer needed to people who can benefit from them is truly an exercise in compassion and the personal level of  INCREASED CAPACITY resulting from the effort is nothing short of miraculous.