More Than the Magic 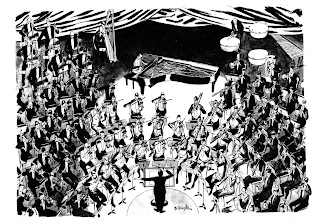 Several years ago I found myself watching a PBS special presentation of Andre Rieu - Live in Dublin.

For those of you who haven’t heard of
Andre Rieu – he is a violinist/conductor/showman of world renown who usually gives concerts only in Europe but on that day I realized he would be appearing in the states that spring in Detroit.  I was elated to learn this because I had seen several of his concerts on PBS and, in fact, owned several DVD’s of  the concerts and nearly all of his CD’s.


Andre Rieu's music and the enchanting way he presents it speak to my soul.  The camera work  on an Italian production I’ve seen, for example, was amazing - simultaneously capturing the soulful artist center stage, the sweep of an enraptured European audience amid the beauty of an Italian piazza in the moonlit night and a close-up of a grandfatherly gentleman listening to Andre with emotion-filled eyes and a tear sliding down his face.  The thought of being a part of all this was compelling.  Just as I made a mental note to call about tickets the next day, I heard the TV commentator remark that the concert had been sold out, but that a local university was holding a block of tickets for its contributors.


I noticed the number of available tickets was rapidly decreasing each time the concert was interrupted by the broadcasters to make a sales pitch for contributions.  Suddenly, someone was saying there were only ten tickets left and I realized that if I didn’t act now, I would lose this glorious opportunity.  I picked up the phone and suddenly found myself making the $250 contribution to the university, ensuring my attendance at the fabulous concert.

My impulsive decision amazed me.  I had often wondered if  I could be so moved that I would spend the kind of money concert tickets usually cost.  And, here I was, making a $250 contribution to get me to that moment.  God bless the magic that moves us out of our every day lives!


The Andre Rieu concert in Detroit I so anxiously awaited that spring was held at the stately Fox Theater.  When I arrived that evening,I fond it teeming with people streaming into the lobby.  As I found my seat I was mesmerized by the ornate and delicate beauty of the theater’s ceiling.  I was thrilled to be sitting up so high.  Meanwhile, I had been muttering periodically to myself about not having remembered to bring binoculars, but I put that concern aside when Andre and the Johann Strauss Orchestra took the stage, individually marching up the center steps with great ceremony to the strains of “Entry of the Gladiators”.

Dressed in ebony tuxes and elegant, iridescent gowns, the members of his orchestra looked ready to play for the Queen.  The audience members at the Fox Theater that night numbered five thousand and you could feel the anticipation and excitement in the full house as the maestro raised his violin.  Behind him sat his talented orchestra, heavily favoring violins and cellos, but the evening would prove they were very capably balanced by the brass and drum sections.

As usual,  the maestro immediately struck a warm and convivial note with the members of his audience, including them in his commentary and especially in his musical pranks which were sprinkled throughout the evening.  He and his orchestra and performers were treated to several standing ovations.  Three female soloists (two from Brazil and one from Holland) were flawless in their presentations.  I could not believe the fabulous acoustics in a theatre of this size. As they performed, the obvious delight of the maestro, the orchestra and soloists hung rapturously in the air.  At one point, Maestro Andre passionately proclaimed the Strauss family responsible for the best waltzes ever written, as he proudly introduced “The Blue Danube”.

Sitting next to me during the performance was another university supporter who had an injured back from a car accident.  I lent her my lumbar cushion which I had brought with me but didn’t need at this point and she generously lent me the use of the binoculars circulating within her party.

The magic continued until the last waltz played was hailed with a burst of colorful balloons from what seemed like the miles high ceiling.  I do not know what was more touching…the music or the joy of the people performing and listening to it.  I was so thankful for the intuitive leap which had prompted me to make the contribution and secure the accompanying concert ticket.


After the performance I hurried outside, hoping to get one of the first cabs I expected would be lining up in front of the theater.  As I looked around, I saw no cabs but instead what looked like a blockade of buses.  (The performance was being presented exclusively for patrons of PBS and it seemed many members of the audience had traveled to Detroit in their respective group transportation.)  Furthermore, there was apparently some sort of minor fracas going on between a policeman who refused to let the cabs double park because of the danger to patrons who might be running out in between buses and the doorman in red tails and black top hat who was trying to find cabs for the patrons.

A few moments later the handsomely attired doorman confided to us affectionately that the policeman was causing him a great deal of trouble but he promised to help and smilingly continued to search for one of the cabs which he promised were even now circling the block.  Eventually, the two uniforms struck a compromise and the policeman promised to keep all of the buses away from the theaer entrance at the next performance.

Finally, a cab was found and I climbed into a back seat that was VERY tightly wedged behind a barrier separating me from the cab driver.  As the cab pulled away, I tried to engage the driver in some casual conversation about the traffic and endless construction and he told me in a voice heavy with contempt that Detroit was the worst place in the world in which to live.  He then announced that no one there was human.  When I asked him why he felt this way, he could only repeat his comment two or three more times and shake his head.  Feeling his pain, and because I make it a practice to be especially considerate to anyone whose pain is transforming his life force into cynicism, negativity or depression, I gave him a $7 tip for the five minute cab ride, but he seemed not to notice…or to care.

I was struck by the significance of the glorious festivities ending in this way and felt there was most definitely a lesson here.  That evening I had encountered so many faces of humanity:  the artistic genius of Andre Rieu, the joy and talent of his orchestra and performers, the elation of the audience in hearing the concert, the generosity of the woman in the next seat who lent her binoculars for my enjoyment, the jolly red-tail coated doorman, the policeman who eventually came to a compromise with the doorman regarding the “lost” cabs and, finally, the cab driver whose aura (had I been able to see it ) must have reflected the darkness of the night and of his psyche.  In the midst of the artistry, joy and exuberance of those attending and performing at the concert, here was this lonely, lost cab driver who seemed as if he had no drop of hope in the world to sustain him.

I pondered the amazing parade I had witnessed that evening and considered what part we had all played in this drama.


We are all responsible for the gifts and pain of the world.  Just that past week I had heard Carl Franklin, an international speaker with over thirty-five years of spiritual/metaphysical research, teaching, lecturing, and counseling, remark that reality as we experience it is shaped by mass human consciousness via the quantum field.  There is no speed limit here, he said.  The speed of thought is instantaneous.


In reflecting on this I asked myself what kind of thoughts and emotions have we all been projecting into the cosmos?  What caring and concern?  When have we ignored the suffering of humanity?  When have we answered its call?
We (every one of us) helped bring the joy of the glorious and amazing music to its manifestation at the concert and, equally, we helped shape the tragic sadness of the cab driver I encountered in the night.


We have all contributed to the collective energy which produced in the same evening the higher vibrations of exquisite artistry and, simultaneously, the lower cadences of hopelessness and despair.  The concert, I feel, represents the awesome joy that is possible and the cab driver the pain that must not be left unattended.


I received more than the gift of music the evening I attended the concert of Andre Rieu, more than just the magic.  I was also given a reminder of our common brotherhood and the responsibility of adding joy and love and, most especially, compassion to life.  As always, my intuition has been my great teacher and friend…and, in this moment, a conscience for humanity.

cab image from chachadiaries.blogspot.com
Posted by Mystic Marks at 1:34 PM