Down the Rabbit Hole: Alice Discovers the Rulebooks 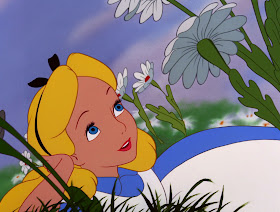 There was soooo much to discover, Alice realized, as she blinked repeatedly, wide-eyed at the strange goings-on in the rabbit hole.


The bizarre behavior she encountered from the various creatures chattering and buzzing about made no sense to her UNTIL she realized that it MADE SENSE to them.  And that was the very secret she uncovered that helped her to understand and navigate this bewildering territory.

Apparently, each of the characters in the rabbit hole had his or her own Rulebook.  And each Rulebook was different from all the others.  It seemed these Rulebooks were not easy to come by and one had to experience some perilous adventures to earn this achievement.  And, furthermore, she discovered, the precepts written in the Rulebooks might magically disappear at any time to be replaced with new prescriptions.  It all seemed to depend on the actions of the characters, she observed, though she wasn't sure that they realized they had this power.

The Rulebooks seemed to be especially important to Alice because they helped her make sense of the thespians' behavior.  Alice began to pay close attention to the interface of the characters' actions and what she deduced was written in their Rulebooks and things began to make sense to her.  She realized that the Rules were there to protect each character.  They appeared in the Rulebook as needed and could be changed or even erased depending on what the character learned from his experiences.

Not every character down the rabbit hole was ready to learn anything.  Many of them seemed agitated and anxious; some were totally convinced they already knew everything.  The behavior they exhibited often tried Alice's patience but, over time, she realized they were stuck in a default loop that kept repeating itself.

What was Alice to do?  At first, she tried to argue with them; later, she avoided their company as best she could.  But Alice was not happy doing this and she WANTED to be...even if she WAS smack in the center of the rabbit hole.
One day Alice was in an especially happy mood and she decided to try to be VERY patient with the mad hatter.  She listened patiently while he hopped in circles, talking incessantly, trying her best to be attentive and understand what he was saying.  Then, a funny thing happened.  The Mad hatter began to notice that Alice was paying attention and he was NOT used to anyone REALLY listening to him.  He began to look at Alice every few seconds while he was chattering and, then, an amazing thing occurred.  He began to speak slower and slower and before long he slid onto a toadstool near Alice and stopped talking completely, watching her face for a response.

Alice was amazed.  No one had EVER slowed down the mad hatter before.  What was happening here, she wondered.  As Alice continued to give her rapt attention to him, she saw a light began to shine in his eyes.  The light grew bigger and brighter.  Soon it spread to his whole body.  Oh my, thought Alice...he is GLOWING.

Alice thought about his new behavior.  She had been very sure that the Mad Hatter's Rulebook stated that he should keep moving and chattering away as that is what he always did.  Now, it seemed to Alice, that his behavior had changed and, therefore, his Rules.

How did this happen, Alice wondered.  She had not tried to talk the Mad Hatter into doing things differently.  She had not argued with him nor tried to persuade him to make a change.  In fact, she had done her best to honor and respect his frantic behavior.  Alice felt the erratic movements of the Mad Hatter must have been prescribed in his Rulebook and that the Rule must have existed for some good reason even if she didn't know what it was.  What she had done now was just give the Mad Hatter her interest and care...and he had noticed...and it had circumvented his usual pattern.

THIS was something VERY significant, Alice thought and wondered about the powerful transformation she had witnessed.  The Mad Hatter was still sitting quietly and he was still glowing very brightly...so brightly that many other creatures wandered over to see what had caused this transformation.

Alice theorized that if the Mad Hatter was sitting still, then a new Rule must have appeared in his Rulebook for he looked very relaxed and happy.


Suddenly, Alice noticed that the Mad Hatter was beginning to look lighter and lighter.  Soon he seemed almost luminous.  Alice thought he might drift away but instead he began to share his glow with the creatures standing near him.

Alice was amazed and delighted and, most of all, she felt happy.  And that is when the Rules in her Rulebook changed.  She sighed contentedly and plopped onto a nearby toadstool.
Who was it, she wondered, who had created the Rulebooks and had mysteriously given each creature the power to change the Rules.  This, she thought, would surely be a great question for one of her next, fabulous adventures.
Marie Helena


image from commons.wikimedia.org
Posted by Mystic Marks at 5:21 PM